The IRRAD proton facility is located on the T8 beam-line at the CERN PS East Hall (building 157) where the primary proton beam with a momentum of 24GeV/c is extracted from the PS ring. As shown in the figure below, the space allocated for irradiation tests in the East Hall is shared between two irradiation facilities: the IRRAD proton facility is located upstream while the CHARM mixed-field facility is implemented downstream. Since most of the protons pass through the IRRAD facility without interacting, the mixed-field facility can profit from the same protons used by IRRAD. Inside CHARM, these protons impinge on a target surrounded by a well calculated shielding configuration.

The IRRAD proton irradiation facility at the PS East Area is maintained and operated by the irradiation team within the EP-DT-DD section at CERN. 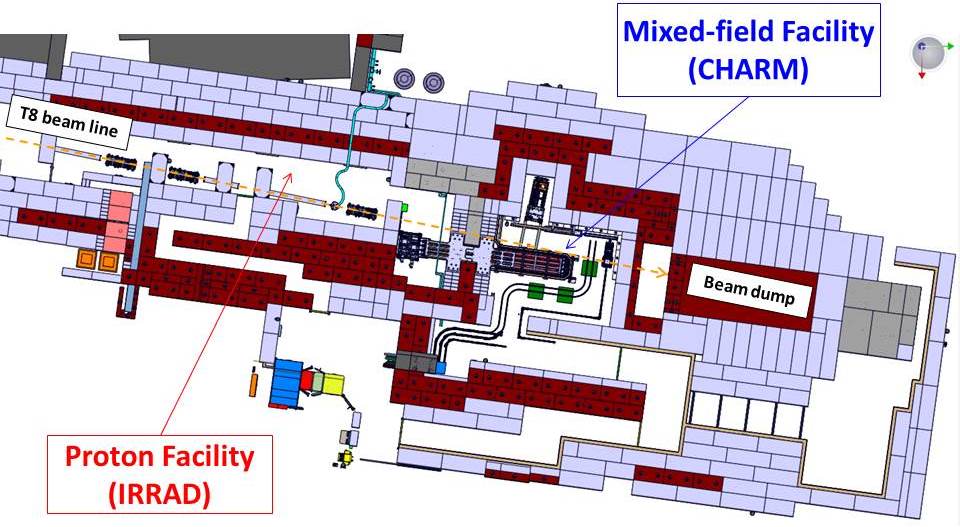 The IRRAD facility is subdivided in three zones (going from upstream to downstream) according to the nature of the samples to be irradiated. In between each irradiation zone, a separation wall 80cm-thick (with a hole to allow the beam to pass through) is placed in order to reduce the radiation background during irradiation and to minimize the ambient equivalent dose to the personnel during the access to the area. As visible in the picture below, in order to reduce further the secondary radiation produced by the interaction of the proton beam with the air, section of vacuum beam-pipes are installed in the empty space between the installed irradiation systems.